No-Breeze Consignment Concept Will Be Back in 2019 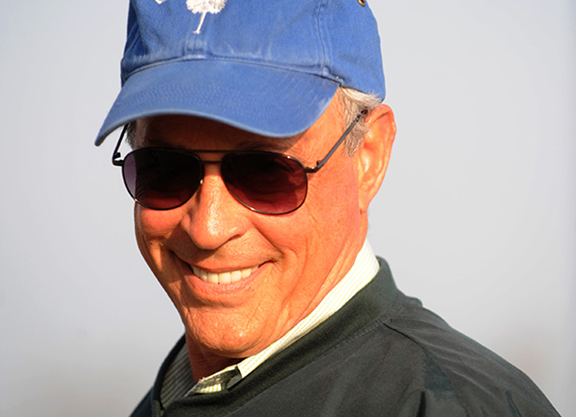 After auctioning five juveniles this past spring without sending the horses hard in timed under-tack breezes, the aptly named Gulfstream Gallop LLC had already been planning to give the concept a go again in 2019.

But when the first filly to start from that consignment wired a Del Mar MSW field on Aug. 18 by 5 3/4 lengths, it only emboldened agent Kip Elser of Kirkwood Stables to be on the hunt for a slightly higher class of yearlings–and potential new sales partners–to expand upon the concept of focusing on the juveniles themselves and not on the clock.

Splashy Kisses (Blame), a $30,000 purchase out of last year’s Fasig-Tipton Turf Showcase sale, sold for $100,000 at FTFMAR to Dennis O’Neill on behalf of ERJ Racing. Trained by Dennis’s brother, Doug O’Neill, she debuted eighth on July 18 at Del Mar, then flashed strong speed straight from the gate in a six-furlong sprint to win start number two for owners ERJ Racing LLC and Dave Kenney this past Saturday.

“She ran opening day, got a good schooling, and came right back and did what she was supposed to,” Elser said via phone from Saratoga earlier this week. “Kudos to Dennis, and everyone else who had the courage of their convictions to buy a horse without seeing them breezing back in the spring.”

Elser, speaking on behalf of the silent partner who came up with the idea for eschewing the current convention of participating in the one- or two-furlong pre-sale breezes, noted that of the five yearlings the group purchased specifically for that purpose, four sold at the Fasig-Tipton sale at Gulfstream in March and one was bought back and later re-sold at Fasig’s Timonium sale.

“We are definitely going to do it again,” Elser said. “My original client just bought the first horse at the Fasig July sale, and we’re just now putting together another group to go ahead and do it again. I think there’s room in the market to expand it somewhat. We’re right now just at the start of trying to seek out a few new partners, and I’m excited about expanding it.”

The new partners could mean that Kirkwood will represent a second group of sellers separate from the initial Gulfstream Gallop venture, the founder of which wishes to continue as a silent entity.

“He doesn’t want credit or blame. He loves the game, and he was very brave to come up with the idea in the first place. He just wants to enjoy it and do it privately,” Elser said.

The consignment’s second starter, Irish Hustle (Data Link), was also a $30,000 FTKTUR buy. She resold for $65,000 at FTFMAR and debuted with a 10th-place finish in a Monday MSW turf sprint at Saratoga.

“[Trainer] Bret Calhoun ran his filly here at Saratoga [Monday]. She’s trained very well, and her trip [Monday] was not too far off Splashy Kisses’ first start,” Elser said. “But everybody that I’ve talked to is pleased with the progress of their horses, and we’re looking to a big fall out of the five of them. They’re spread around the country, and we’ll let them go out and prove themselves.”

Elser was asked what he learned from the first go-round of non-breezing juveniles that might change what he does the second time around.

“It’s definitely contrarian,” he said. “I’ve gotten nothing but a positive response out of it. But any time you do something a little different, it’s actually more retrospective than new. I think we pretty much got it right the first time. I might try to ratchet the purchases up a notch.”

Courtesy of the DRF by Jay Privman 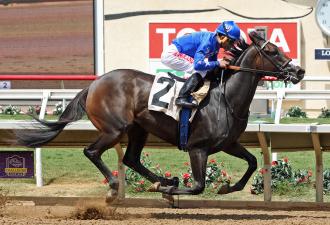 Splashy Kisses drew the rail and was eighth in her debut going five furlongs when facing the highly regarded Brill on opening day, July 18. She won going six furlongs Saturday.

“She acts like the farther the better,” said O’Neill, who trains Splashy Kisses, a 2-year-old daughter of Blame, for Dave Kenney and Erik Johnson, a defenseman with the National Hockey League’s Colorado Avalanche. “It was a happy surprise how much speed she showed, and she kept going.”

HIT IT ONCE MORE ( Hard Spun) had no trouble at all wiring the field to win the  Genesee Valley Breeders’ Stakes at Finger Lakes.  Last year he was 4th in the same race, The five-year-old horse has 3 prior stakes wins under his belt, the NY Derby, the Albany Stakes and the Haynesfied Stakes. He is owned by Yellow Moon Stables LLC and trained by Gary Sciacca. He has an enviable record of  30-7-2-5, $553,342 HIT IT ONCE MORE got his start with Kirkwood and was sold at Timonium as a 2-year-old in training for $90,000.

ARCH THE DIVER (Arch) gave West Point Thoroughbreds a resounding victory at Saratoga – graduating by almost 10 lengths while eased. He raced 1 1/18 on the dirt when his race came off the soggy turf.  The 4-year-old Graham Motion trainee made his first start almost a year ago. It was worth the wait!

SPLASHY KISSES (Blame)  broke alertly with Joel Rosario up and  led after a furlong while challenged on the outside. On even terms entering the stretch, Splashy Kisses dispatched her rival and charged home a 5 3/4-length winner.  She is the first winner from the Kirkwood Gulfstream Gallop contingent, a group selected by Kip Elser to gallop only rather than breeze.
Sales history: $30,000 Ylg ’17 FTKTUR; $100,000 2yo ’18 FTFMAR.
Lifetime Record: 2-1-0-0, $36,345.
O-ERJ Racing LLC & Dave Kenney;
B-Winchester Farm (KY);
T-Doug F O’Neill.

Off the favorite and racing 1 1/16 on the all-weather track for West Point Thoroughbreds, FIRE FOR EFFECT (Smart Strike) raced midpack until moving out to gain command in the final furlong.  Once in the lead, he drew off for the win by 3 lengths. The 4-year-old colt is trained by  Ralph J. Biamonte.

After REALM won an allowance race at Aqueduct in November 2016, it took a long time to get back to the winner’s circle…19 months in fact. Fortunately for his connections, they didn’t have to wait another 19 months to get their picture taken, as the horse they bought as a two-year-old made it two straight winning the Alydar Stakes at Saratoga Race Course on August 5.

In the early stages of the nine-furlong Alydar run on a fast track, Junior Alvarado and Realm tracked leader Outplay, keeping him well within reach. Heading up the backstretch, Realm retreated to fourth place, off the leader by a good three lengths, and as Outplay increased his lead through slow fractions of :24.32 and :47.96. Realm, too, seemed unhurried, falling well behind the pacesetter.

But coming around the final turn, Alvarado took the dark bay gelding off the rail for the first time, going four wide and asking him for run. Initially making up little ground, Realm found another gear and spurted to the wire to just catch Kurilov, winning by a head.

“I thought sure we got beat,” admitted trainer Barclay Tagg, who owns the horse in partnership with Eric Dattner and Harry Astarita.

Alvarado commented, “When I worked him last time, I said, ‘The chance to win a stakes race is right now because he feels like he’s on top of his game.’ We took a chance and tried to pick up a check, and we ended up in the winner’s circle.”

Bred in Virginia by Morgan’s Ford Farm, Realm was selected by Tagg from the 2014 Fasig-Tipton Midlantic Eastern Fall Yearling sale, paying $75,000. The horse had sold in July at the Fasig-Tipton Kentucky yearling sale for $36,000. Out of the Chief’s Crown mare Shawnee County, he’s earned just over $350,000.

“Harry and I have had a couple of horses together,” Dattner said, “but this is the first with Barclay. He said he’d like to own a horse but couldn’t afford one, so I paid for the horse and he paid for the upkeep until he caught up.”

“I thought he was beautiful,” Tagg said. “I don’t have the money behind me to buy on breeding. I buy them on looks and I’ve been very lucky doing it.”

Although placed in three graded stakes races, Realm, who was his sire Haynesfield’s first winner, had yet to earn a stakes win of any kind. It was not exactly what his connections expected, and nor did the public, sending him off as the 12-1 longest shot in the field of five. He paid $27.20 to win.

“He’s been…let’s say ‘steady,’” Dattner said diplomatically. “He’s more of a grinder. After he dropped back to fourth, I said to myself, ‘That’s not his style.’ This was a pleasant surprise.”

“It’s fun until it gets burdensome,” Tagg said of owning a horse. “We went though a couple of dry spells with him, and when you have one that you own part of, it’s tougher sometimes. But it’s better when this happens.” 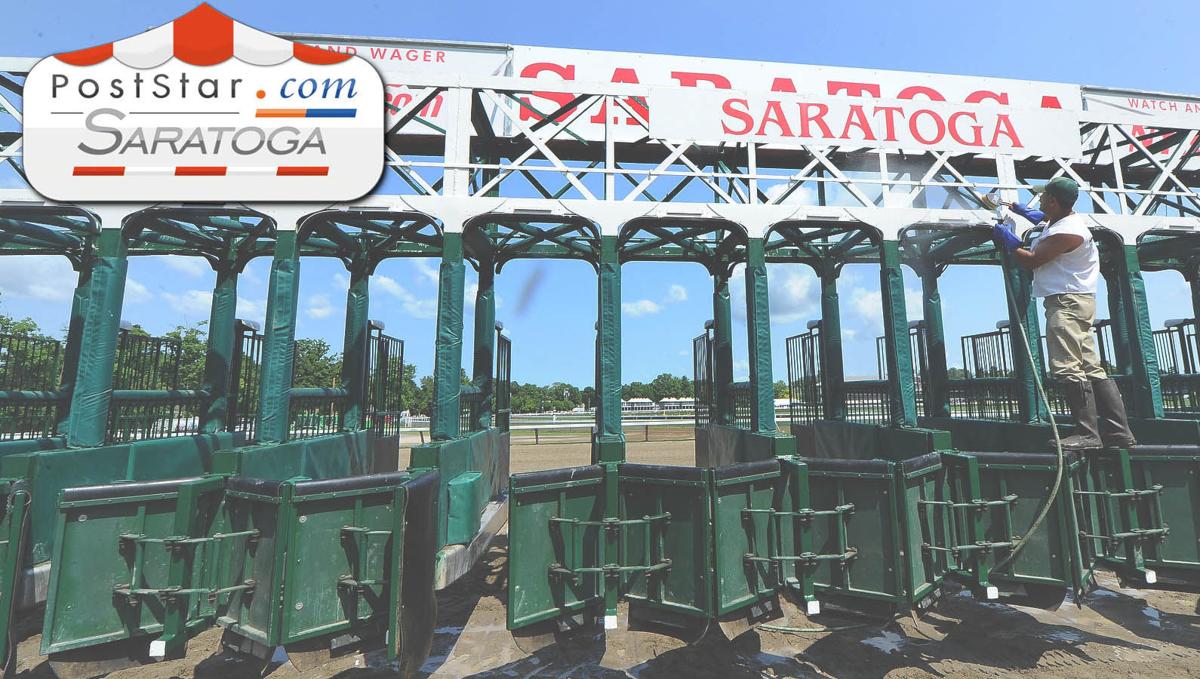 SARATOGA SPRINGS — Long shot Realm won by a nose in the $100,000 Alydar on Sunday at Saratoga Race Course.

Junior Alvarado brought the 12-1 horse from the back of the pack to overtake Kurilov at the wire. The horse paid $27.20 to win.

“He’s talented, but they kind of ran away from him a little bit, too, there,” winning trainer Barclay Tagg said in a NYRA statement. “(Alvarado) rode him nice and coolly and cut him to the outside when he had to. That’s the only thing you can do if he’s not in front; you’ve got to get him to the outside, but you don’t want too early and lose all that ground, either. He just rode him perfectly.”

REALM was selected as a yearling by Kirkwood.

Multiple graded stakes-placed REALM  (Haynesfield bided his time on the rail and then tipped out to surge down the stretch for the win. He has multiple stakes placings, but this is his first stakes win.  REALM  is owned by his trainer Barclay Tagg , Eric Dattner and Harry Astarita and has earned over $350,000 for his connections.

I’M BETTY G was selected by Kirkwood  as a yearling. Racing a mile on the turf at Ellis Park in the Kentucky Downs Preview Ladies Turf Stakes , the well-traveled I’M BETTY G (f, 4, Into Mischief- Lady in Ermine, by Honour and Glory) wired the field to win her second stakes in a row and her third race in a row.  In her last start, she cleared the field early and drove on to a win in the Lady Canterbury S. at Canterbury Downs also racing a mile on the turf. Last year she won the  Pearl Necklace S.  at Laurel and added a pair of thirds in the South Beach S. at Gulfstream and the  Albert M. Stall Memorial at the Fair Grounds.
Sales history: CONSIGNED BY KIRKWOOD STABLES)$150,000 2yo ’16 EASMAY.
Lifetime Record: SW, 15-5-1-5, $314,175.
O-Three Diamonds Farm
B-Carol Kaye & Boyce Stable (MD)
T-Michael J. Maker.

Courtesy of the TDN
I’m Betty G made it three straight with a professional victory in the Kentucky Downs Preview Ladies Turf S. at Ellis. Away sharply from post four, the bay scampered to the front and led through respectable fractions of :23.84, :46.52 and 1:09.46. Collared by Bonnie Arch leaving the quarter pole, I’m Betty G quickly repelled that charge and had enough momentum late to best English Affair by a length at the wire. Bonnie Arch rounded out the trifecta. I’m Betty G, winner of last season’s Pearl Necklace S. against Maryland breds, finished third in a pair of graded stakes in 2017; Laurel’s GIII Commonwealth Oaks and the GIII Pin Oak Valley View S. at Keeneland. Runner-up in a pair of stakes to kick off this season, she came home a front-running winner going seven-eighths in a Belmont optional claimer Apr. 28 before annexing Canterbury’s one-mile Lady Canterbury S. June 23