Racing for G M B Racing trained by  Dallas Stewart, TOM’S READY added to his laurels closing to run a strong 3rd in the FOREGO G1 at Saratoga on Travers Day. TOM’S READY has already earned graded victories in the Ack Ack (Gr. 3) and Woody Stephens Stakes (Gr. 2). He enjoyed his early preparation at Kirkwood Stables.  He has earned  $863,767 for his connections. 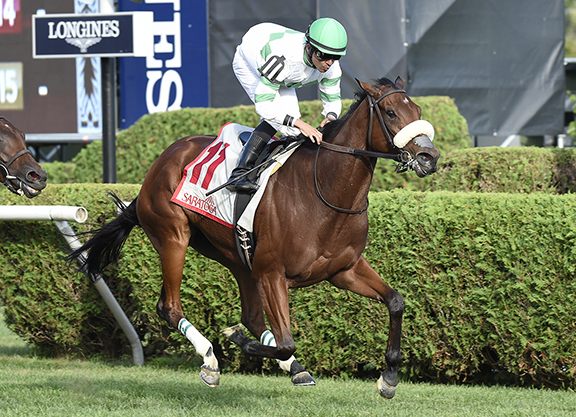 Defiant Honor, the beaten favorite in the GIII Lake George S. on opening day, made amends with a stalk-and-pounce score in the Riskaverse S. Thursday at Saratoga.

A second-out winner last fall at Belmont, the bay shipped across the country to be runner-up in the GIII Jimmy Durante S. Nov. 26 before capturing an allowance in her sophomore debut June 21 back at Big Sandy. Fading to sixth after tracking the pace in the Lake George, Defiant Honor was made the distant second chance in this feature and broke sharply before allowing favored ‘TDN Rising Star’ Cherry Lodge (Bernardini) to sprint clear through a :23.67 quarter. That one was able to slow things down past a :49.15 half, but had a tenuous lead at the top of the lane. Defiant Honor was the first to attack, quickly taking charge from the pacesetter at the three-sixteenths pole, and she kicked clear into the final furlong before holding sway late from Fizzy Friday (GB).

“I think she’s a quality filly and things went well for her today,” said winning trainer Jimmy Toner. “She had had a myectomy, where they cut the muscles in the throat because, with the displacement of the soft pallet, it cuts off the wind and they can’t breathe and they panic. But today, you can see the difference. Also, the way the race set up, there was one speed and she didn’t have to be restrained or anything. It was a perfect trip. Everything worked out today. It’s all good.”

The winner is a full-sister to ill-fated Recepta, GSW & MGISP, $696,700 and a half to Taqarub (Aldebaran), GSW, $256,962. Her dam is a half to champion Soaring Softly (Kris S.) and GISW Plenty of Grace (Roberto) out of GSW Wings of Grace (Key to the Mint). Honor Bestowed has a juvenile full-sister to the victress named Honored Promise, a yearling colt by Curlin and foaled a Speightstown colt this season before being paired with Dialed In.

With Bill Higgins, trainer turned garlic grower at Saratoga Garlic and his daughter Erinn – the only woman racing steward in NY

And there were many many more!

On At The Races with Steve Byk
https://stevebyk.com/

SOUND THE HORNS (Include)  overcame  traffic, racing 3 wide and then a furious stretch duel to win by a neck for his connections owner West Point Thoroughbreds and trainer Graham Motion. He has won 3 and has a second in 5 starts.