BASELINE  exploded out of the 1 hole and sailed to a wire to wire win never leaving his inside position. He raced 1 1/16 of the turf and won by 1 1/2 lengths. The 3 year old gelding  is owned by Steve Landers and trained by Brad Cox.  He has earned $106,905.

Second last out at Ellis Park, 3 year old Blame filly TRIVIAL found the Indiana Grand turf to her liking and broke her maiden going 1 1/6 in a MSW. She pressed the pace and then cleared the field and held on to win by 1/2 a length. She is trained bt Brad H. Cox and owned by Tracy Farmer.

Courtesy of the Blood Horse
COAL FRONT was a $575,000 OBS Sales grad for Kirkwood

The connections and fans of Coal Front experienced the sport’s highs and lows this weekend.

But after the race trainer Todd Pletcher announced that the Stay Thirsty  colt had suffered a condylar fracture in his right front. The connections are optimistic Coal Front can come back from the injury.

As for the race, Coal Front and jockey John Velazquez powered through a quarter-mile in :22.51 and half-mile in :45.21 then completed the final two furlongs in :23.73. In the stretch, Coal Front resisted a challenge from American Pastime, who pulled to within a head of the lead in midstretch. American Pastime would finish a half-length back in second, earning the week’s second-fastest ESF, 117.

Coal Front improves to four wins in five starts and secured his second graded stakes win. He has earned triple-digit ESFs in all of his races and the 118 is a career best.

In his career debut Coal Front registered a 106 in winning a six-furlong maiden race in April at Keeneland. In his third start and stakes debut, he was awarded a 111 for his front-running victory in the 6 1/2-furlong Amsterdam Stakes (G2) July 29 at Saratoga Race Course. 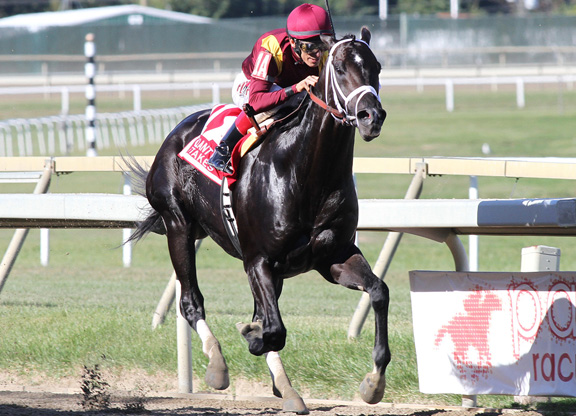 Coal Front was heavily favored to get back on track as part of an entry with Petrov following a fifth-place finish in the prestigious GI H. Allen Jerkens S. at the Spa Aug. 26.

Seizing the early advantage, the $575,000 OBSAPR buy zipped through opening splits of :22.21 and :45.21. American Pastime made a menacing sweeping move on the far turn and drew alongside Coal Front entering the lane and the stage was set. The duo battled down the lane, but Coal Front kept on finding more every time American Pastime came at him and held on for a narrow success.

Coal Front’s unraced dam Miner’s Secret, a half-sister to MGSW Woodlander (Forestry), is responsible for a yearling colt by Noble Mission (GB) and foaled a Pioneerof the Nile filly Feb. 28. She was bred back to Triple Crown hero American Pharoah. Miner’s Secret went through the ring twice, bringing $250,000 from Reynolds Bell Jr., agent, at the 2006 KEESEP Yearling Sale and $52,000 from Coal Front’s breeder Michael Connelly in foal to War Pass at the 2009 KEENOV Sale.

On the same day at Belmont,

RED CORVETTE (Warrior’s Reward) did just what red Corvettes are supposed to do, he sliced through traffic to hit the wire in front by a nose. He is trained by Gary M. Scherer for owners Carolyn Friedberg  and Jeff T.Larson.

WHOLE LOTTA LUCK (Lookin at Lucky) had to steady due to tight quarters,  but went on for the win once in the clear. He raced 1 1/16 on the dirt.  The gray was claimed out of his race and we wish his new connections the best.

He discussed the wonderful relationship with John Phillips, Darby Dan and Jimmy Toner and the  luck they have had with the SOARING SOFTLY family and other foundation Darby Dan horse families.
https://stevebyk.com/
‘At the Races’ ~ Sirius 219, XM 206 (M-F/9a-12p ET)

Going1 1/4m on the turf, MANITOULIN a 4 year old gelding, (Awesome Again-Soaring Softly {Ch. Grass Mare & MGISW, $1,270,433}),  zoomed  to the lead once in the clear and drew off to win by  2 1/2-lengths success – his 4th win. MANITOULIN is a half to Much Rejoicing (Distorted Humor), SW, $160,457.  He has already bankrolled  $274,220 for owner Phillips Racing Partnership. MANITOULIN was bred by Darby Dan and is trained by James Toner.  Kirkwood has enjoyed repeated success with this family of horses and has given many of them their early education.

On the same day, GRAY DUDE won at Gulfstream at a mile on the turf. He is owned by Crystal Racing Enterprises  and trained by Armando  De la cerda.

Horse racing is a global sport, heralded for its international festivals where the world’s greatest come to compete. Not only has racing become more of an international affair, but so, too, have sales. No matter what sale you go to in the world it is becoming increasingly common to see industry leaders from each jurisdiction congregate at major sales rings. One man who knows much about this is Kirkwood Stables’ Kip Elser, who has an exciting sales venture starting in Australia.

Known for his success at pinhooking yearlings to 2-year-olds as well as educating young racehorses, Elser has always had an eye for spotting emerging markets. As such, he has teamed up with former American-based trainer Murray Johnson to offer a ready-to-run consignment at the upcoming Magic Millions 2017 Gold Coast 2YOs-in-Training Sale Oct. 10-11 at their sales complex in Bundall, Queensland.

“My wife Helen’s dad had done some business in Australia and he suggested to us that we go take a look at things down there a few years ago. We went over for their 2-year-old sale last October at Magic Millions to see if there was room for someone new in the market and I think we see a market that is just starting to take off. I reconnected with an old friend of mine, Murray Johnson, who had been in America for a number of years but has moved back to Australia, and I went back in March and bought three yearlings to be over there with Murray and consign at the ready-to-run sale at Magic Millions in October this year.”

Based at Spring Dale Race Center in Camden, South Carolina, Elser has been pinhooking for the better part of 30 years and is no stranger to entering foreign markets.

“We have sold here (in America) at lots of different sales, and about 10 years ago we started selling at the Breeze Up at Tattersalls in England and did very well out of it. Then we started going to South Africa five or six years ago. We got introduced to a wonderful couple down there, Nicola and Mark Coppez of Balmoral Stud, and we started building a 2-year-old sales consignment with them. We’ve done great business and built the operation from 12 or so horses to over a hundred in this past year.”

Elser knows about the many variables associated with horses and sales, but thanks to the shuttling of stallions from the Northern Hemisphere to the Southern, Elser was able to stay within his comfort zone to some degree when choosing yearlings to buy for the Australian venture.

“I bought a colt by Medaglia d’Oro out of Rose of Kentucky (Aus) who can go anywhere, and a colt by Animal Kingdom out of Never Fade (GB) at the Inglis Easter Sale. I also bought a Helmet (Aus)–Angel in Grey (Aus) filly. Helmet is a top 2-year-old sire in Australia and I bought the filly from Spendthrift, so I didn’t get too far off the beaten track for that part of it.”

Of the horses as individuals, Elser said he thought he had “balance in a small package. They are three very different horses, picked that way partly by design. The Medaglia d’Oro colt is a beautiful mover that looks like he will be all class for next spring in Australia. The Animal Kingdom looks a little earlier, probably quicker maturing, so she looks like she will be out early, and the Helmet filly looks to be an early 2-year-old, too.”

Although the venues and the time zones may change, some things are pre-destined to stay the same at a horse sale.

That said, Elser said he was confident in his three representatives for the upcoming sale, and would be going into the Australian market with real hopes of continuing the project for years to come.

“We will make mistakes the first year,” he said. “But we will hopefully learn from those mistakes when we go back the next year, and by the end of the third year, we will have a small crop of 3-year-old graduates and hopefully a larger group of 2-year-olds out there. That will be a fair test of the market to see if there is a real opportunity there. It would be silly to go out there for a one-time deal. We want to show people that we are committed to the market down there and we want to give it a real try.”

Murray Johnson, who has been preparing the horses for the sale, said he was, “very excited about the partnership with Kip. It’s an evolving market and growing like it did in America a few years ago. There are results on the racetrack now from sales graduates and people are starting to see that the 2-year-old sales are a successful formula for the right horse.”

Speaking with Elser about the project, it is easy to see how enthusiastic he is about entering the Australian market. If the elated tone in his voice doesn’t give it away, the smile that spreads across his face when asked about the horses or his plan certainly does.