I’M BETTY G was a $150,000 sales graduate for Kirkwood sold to current owner Three Diamonds Farm. She is trained by Michael J. Maker and has earned over $145,000.

GILDED LILY, a 3-year-old Speightstown filly, moved into the 3 path to edge clear  for the win at Turfway for trainer Michael J. Maker and owner  Tracy Farmer. She loves the surface at Turfway and this is her fourth win over it and her second in a row. She was also on the board in the Bourbonette Oaks G3 over the all weather surface.

After a layoff of almost a year, LOST IRON (Flatter) returned an easy winner going a mile at Aqueduct. He romped by 10 lengths for his owner The Estate of Anthony Miuccio and trainer Linda Rice.  LOST IRON was sold by Kirkwood at the 2015 OBS April 2-year-old in training sale. 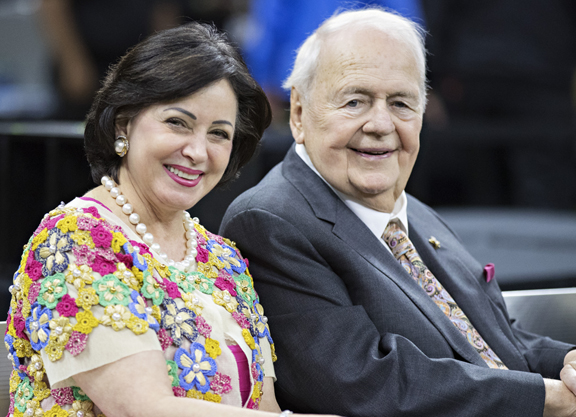 After an eight-wide trip and respectable fifth-place finish in Saturday’s salty GI Cigar Mile, Dallas Stewart-trained Tom’s Ready (More Than Ready) capped a 21-race, 28-month career that saw him clash and hold his own against the very best of his generation. The 4-year-old colt closed out his racing tenure as one of the toughest milers in training and finished at the top of his game, including a flashy GIII Bold Ruler S. win in his penultimate start (earning a 107 Beyer Speed Figure).

“He was a real war horse,” Stewart said. “He traveled around and ran his race over many different tracks and surfaces. He ran competitively against the best horses and really stepped up a lot on big days. He’s a very sound horse who was a lot of fun to campaign. The Bensons were kind enough to let me train for them and never restrained me. They love racing, come to the races even when they don’t have a horse running and they’re icons in New Orleans. Tom’s Ready was one of the first horses we got for them and I look forward to seeing what he does as a stallion.”

Racing as GMB Racing, Tom and Gayle Benson returned with a flourish into racing after a multi-decade hiatus and channeled the passion they have for the professional sports teams they own–the New Orleans Saints of the NFL and Pelicans of the NBA–into a racing product that competes at the highest level. Tom’s Ready tops a group that includes graded stakes winner Mo Tom (Uncle Mo), talented Saratoga allowance winner Tom’s d’Etat (Smart Strike) and Grade I-placed juvenile Lone Sailor (Majestic Warrior).

Tom’s Ready now heads to stud at Spendthrift Farm, where he will stand for $6,000 and participate in said establishment’s “Share The Upside” program for a fee of $7,500.

“He has been a great horse for us,” Gayle Benson said. “He gives his best effort every time he races and has stayed healthy for us. He and Dallas have been a great fit–in the way Dallas trains and the way this horse has responded. We did not know what to expect (when he first started training), but we are very proud of Tom’s Ready and certainly very proud of what lies ahead for him as a he stands as a stallion at Spendthrift. We have a small broodmare band at Benson Farm, and we will certainly be sending him a few mares.”

GMB Racing is managed by Greg Bensel, who also serves as the Senior Vice President of Communications and Broadcasting for the Saints and Pelicans. Bensel, a long time racing fan, has helped guide the outfit to a 19% strike rate and nearly $26,000 in average earnings per start from 80 races. In 2017, the operation has struck at 22%, giving Bensel and the Bensons added fervor for the future.

“We continue to grow our racing stable for GMB Racing and our broodmare band at Benson Farm,” Bensel said. “We are excited about all of our 2-year-olds, but are keen about Lone Sailor for [trainer] Tom Amoss. Also, Tom’s d’Etat has left Benson Farm after rehabbing and will be back to Al Stall [Jr.] as a 5-year-old.”

The beating heart of the Benson operation has become the aforementioned Benson Farm at Greenwood Lodge in Paris, Kentucky. A 600-acre beauty, it is a favorite getaway spot for the couple, while also serving as a rehab facility in another fashion for their equines.

“We have our established racing operations in GMB Racing and now the Bensons have their farm, where it is mostly a private concern, but we do have some boarders and welcome boarders and other clients that have yearlings that need sales prep,” Bensel continued. “It has all come full circle.”

For now, the focus for GMB is kickstarting a second career for its first stallion Tom’s Ready and hoping the best for its soon-to-be 3-year-old class. It will be difficult, though, to live up to their little blazed beast, who was as tough as he was compact and barreled home with the determination of a Saints running back in the lane.

“We got in the business in 2014 with seven yearlings, of which two made the Kentucky Derby in 2016, so it will be hard to repeat that again,” Bensel concluded. “Our hopes are to be good contributors to the racing and breeding industry as we move forward.

The 4-year-old son of More Than Ready —Goodbye Stranger, by Broad Brush will stand the 2018 season for a fee of $6,000 and he will participate in Spendthrift’s “Share The Upside” program for a fee of $7,500.

“We are excited to offer Tom’s Ready to breeders through our Share The Upside program in 2018,” said Spendthrift general manager Ned Toffey. “More Than Ready is emerging as a promising sire of sires, and Tom’s Ready has tremendous looks and a millionaire’s race record. There’s a lot to like, and we believe breeders will see him as a great opportunity. Tom’s Ready has arrived at the farm and we invite people to come out and see him.”

Tom’s Ready becomes the newest stallion to be offered through Spendthrift’s Share The Upside program. His Share The Upside fee comes with a one-year commitment, and breeders will earn a lifetime breeding right beginning in 2019 after having one live foal and paying the stud fee. For breeders not interested in earning a lifetime breeding right, Tom’s Ready will be offered on a standard stands and nurses contract.

Campaigned by GMB Racing and trainer Dallas Stewart, Tom’s Ready scored the biggest victory of his millionaire career in the $500,000 Woody Stephens Stakes (G2) at Belmont Park last year as a 3-year-old. He defeated older horses, including champion sprinter Runhappy , when he took the 2016 Ack Ack Stakes (G3) at Churchill Downs. He was runner-up to Gun Runner  in last year’s Twinspires.com Louisiana Derby (G2) to qualify for the Kentucky Derby Presented by Yum! Brands (G1).

As a 2-year-old, Tom’s Ready broke his maiden by 3 1/4 lengths at Churchill before finishing a fast-closing runner-up in that track’s Street Sense Stakes in his subsequent start. This year at 4, he began the season with a third-place finish in the Churchill Downs Stakes Presented by Twinspires.com (G2) on Kentucky Derby weekend, falling short by just three-quarters of a length at the wire. He followed that up with a win in the Leemat Stakes in July at Presque Isle Downs.

This summer at Saratoga Race Course, Tom’s Ready finished third in the Aug. 26 Forego Stakes (G1) before capturing his biggest victory of the year in the Oct. 28 Bold Ruler Handicap (G3) at Belmont Park, earning a career best 107 Beyer speed figure. He retires with earnings of $1,036,267.

Tom’s Ready becomes the newest son to retire to stud by emerging sire of sires More Than Ready, whose son Sebring (AUS) is the sire of Australian Horse of the Year, Dissident (AUS). A $145,000 purchase at the 2014 Fasig-Tipton Saratoga select yearling sale, the dark bay colt was bred by Blackstone Farm from the Broad Brush mare Goodbye Stranger, a half sister to stakes winners Lemonlime and Miss Moses.

Courtesy of the PAULICK REPORT 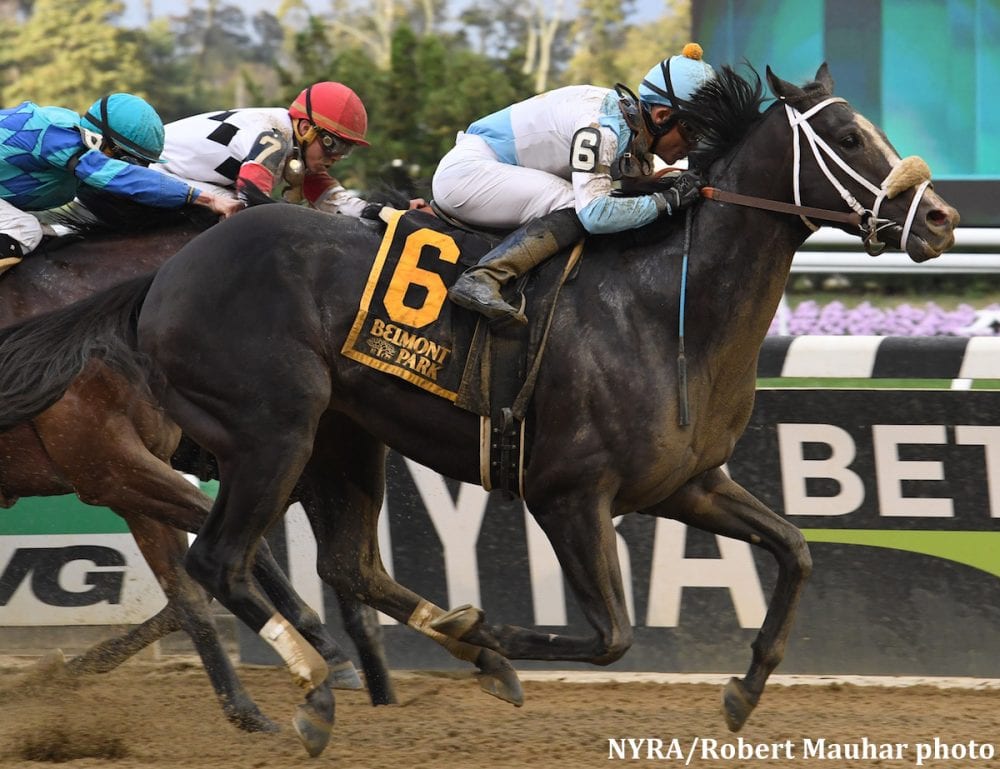 The multiple graded stakes winner by More Than Ready has been at Belmont Park since Sunday as he prepares for his seventh career Grade 1 start and his first trip to Aqueduct.

“He shipped in real good,” Stewart said. “He’s coming off a win in the Bold Ruler, so we’re happy with him. It’s a tough race, but it looks like we’ll get the pace we want, so he should be OK. The race is looking real tough, but he loves New York.”

Tom’s Ready settled for a close third behind winner Limousine Liberal and Awesome Slew in the Grade 2 Churchill Downs on May 6 in his 2017 debut, then finished seventh in the Grade 1 Metropolitan Handicap on June 10 at Belmont. A victory in the Leemat on July 9 at Presque Isle Downs sent the Pennsylvania-bred up north to Saratoga, the site of his first career race in August 2015.

Back-to-back third-place efforts in the Grade 1 Forego on August 26 and the Grade 2 Kelso Handicap on September 26 preceded a winning effort in the Grade 3 Bold Ruler last out on October 28 at Belmont. In his 20th career start, Tom’s Ready went eight-wide into the stretch and came with a late run to best Stallwalkin’ Dude by three-quarters of a length.

The Cigar Mile will be the finale in a successful career that has netted him  $1,013,767 in earnings.

“This will be his last race,” Stewart said. “He’ll go to Spendthrift Farm after his race.”

When Hall of Fame jockey Mike Smith breaks from the gate aboard Tom’s Ready in Saturday’s Grade 1 Cigar Mile, it will be the first time Smith has ridden at Aqueduct since 2013 when he finished ninth aboard Laugh Track in that year’s edition of the Mile.

Smith began his career in his native New Mexico, but relocated to the Midwest before shipping his tack to New York in 1989. He was the leading rider in New York from 1991 to 1993, leading in victories with 330, 297 and 313, respectively. The following year, he rode Lure to his first Breeders’ Cup win, in the Breeders’ Cup Mile. Smith moved west in 2000 to make his home base in California, but has shipped east to New York to ride major commitments in graded stakes races, doing so with success.

GILDED LILY, a 3-year-old Speightstown filly, wheeled out for the win at Turfway for trainer Michael J. Maker and owner  Tracy Farmer. She loves the surface at Turfway and this is her third win over it. She was also on the board in the Bourbonette Oaks G3 over the all weather surface.

Kip Elser has been educating racehorses for more than four decades, and while his roles have changed, the joy Elser gets from working with young Thoroughbreds has not waned. Elser started Kirkwood Stables, a full-service breaking and training operation that also offers consignments and lay-up/rehab services, at Springdale Racecourse in Camden, S.C. Graduates of Kirkwood include Alphabet Soup, Smoke Glacken, Memories of Silver, Winter Memories, Keeper Hill, and Plum Pretty. Elser spoke with BloodHorse Marketwatch to discuss his program, the recent success of Darby Dan’s Manitoulin in the Hollywood Turf Cup Stakes (G2T), and more.