2nd in the Crescent City Derby last out, JUS LIVELY (Paddy O’Prado) won in allowance company going a mile and seventy on the dirt at the Fair Grounds. She is owned by Ellen Addison  and is trained by  Steven M. Asmussen. The 3 year old filly has 3 wins and a second from 5 starts and looks to be off to a promising career. 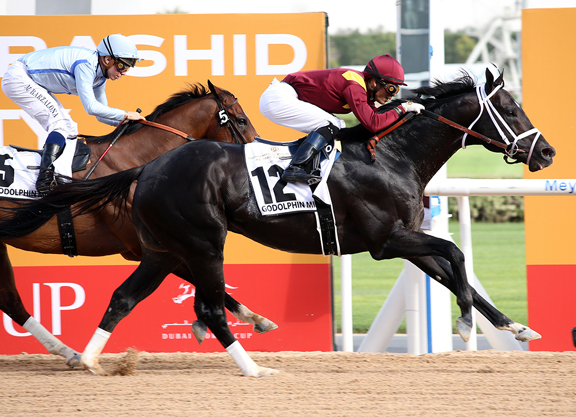 Two ‘TDN Rising Stars’ have found their way onto the growing stallion roster at Spendthrift Farm. Coal Front (Stay Thirsty) and Maximus Mischief (Into Mischief) earned the ‘Rising Star’ title in their first and second starts, respectively, and both went on to become graded stakes winners. Both of these new sires will be a part of Spendthrift’s Share the Upside program, allowing breeders to have a continued breeding right throughout a stallion’s career. Spendthrift’s Stallion Sales Manager Mark Toothaker spoke to us about how the two were settling in and the first reactions from breeders.

Toothaker said he believes Coal Front is one of the most striking freshman sires coming in this year. “He’s such a well-balanced horse. He’s got a big hip and is very correct, but just has eye-dropping beauty.” He said that breeders have already been drawn to him as well. “When you let him out onto the show ring and stand him up to people, they just step back and say, ‘Man, that is just about as pretty a horse as they make them.’”

The son of Bernardini’s Stay Thirsty was a $575,000 2-year-old purchase, bought by Robert LaPenta at the 2016 OBS April sale. Coal Front is out of the Mineshaft mare Miner’s Secret, and is a half to Conquest Titan (Birdstone), a stakes winner at two that went on to place second to Cairo Prince (Pioneerof the Nile) in the GII Holy Bull S. at three. Miner’s Secret is a half to the multiple graded stakes winner Woodlander (Forestry), as well as to stakes winner and sire Admiral Alex (Afleet Alex).

Coal Front is crossed 3×3 to A.P. Indy, which Toothaker said breeders have taken note of as well. “He’s really the best performer on that cross at three-by-three. A lot of people who are really into pedigrees are excited about Coal Front, and I think breeders are going to find a whole gold mine of genetics that they can tap into to get a great chance at a quality horse.”

Coal Front earned ‘Rising Star’ status on debut, breaking his maiden at Keeneland as a 3-year-old and beating the field by 6 1/2 lengths. He went on to take the GII Amsterdam S. at Saratoga and Parx’s GIII Gallant Bob S. later that year.

At four, he won the GIII Mr. Prospector S., and then claimed three more stakes wins the next year including the G2 Godolphin Mile at Meydan and the GIII Razorback H. at Oaklawn. Toothaker said he recalls the Razorback as one of his most impressive wins. “He drew the 14 hole that day, but was able to overcome that disadvantage and win in a very impressive fashion.”

The Razorback was also Coal Front’s first time stretching out to a mile and a sixteenth, and he won by a neck, getting past graded stakes winners Copper Bullet (More Than Ready) and Rated R Superstar (Kodiak Kowboy).

Sent off at 7-1 for this unveiling, settled near the back as Osaka Girl (First Samurai) skipped through an opening quarter in :23. 65. Asked for more leaving the backstretch, the French bred threaded her way between rivals and was in contention turning for home. Inching closer to the leader in the lane, she hit the front late and was 3/4 of a length ahead of that rival at the wire. Favored Mo=s Clare (Uncle Mo) never factored finishing 11th.