Sprinting 5 furlongs on the turf at Gulfstream in the CRYSTAL RIVER S, MR FRENCH(GB) by Mr. Sidney added his first black-type placing second by 1/2 a length. He was bred Earl Haras Du Quesnay and trained by Marcial Navarro for owner  NME 56 LLC .  Consigned and sold for $45,000 by Kirkwood in the OBS March 2016 sale with Gary Young the buyer.

Trainer Bob Baffert was out of luck Saturday in Maryland, but “TDN Rising Star” Mucho Gusto provided at least some measure of consolation when proving too strong for five other rivals in the G3 Laz Barrera S. The prohibitive favorite hit the ground running from the inside gate and raced inside in a line of three vying for the early lead, but Joe Talamo took a quick look to his right and asked Mucho Gusto for a bit of acceleration to give themselves a bit of breathing room for the run up the backstretch. Settled nicely in the middle stages and held together into the final quarter-mile, Mucho Gusto repelled a challenge from Vantastic at the threesixteenths pole, responded to a couple of left-handed whips to pinch a break into the ultimate furlong and strode home a daylight winner.

Accorded “Rising Star” status after besting Vantastic by four lengths on Los Alamitos debut last September, he led throughout to take Del Mar’s G3 Bob Hope S. Nov. 17 before finishing runner-up to fellow “Rising Star” Improbable (City Zip) in the GI Los Alamitos Futurity. The chestnut looked to be among Baffert’s top Classic hopes when running out a decisive winner of the G3 Robert B. Lewis S. in February, but he was beaten six lengths into third in the G3 Sunland Derby Mar. 24 and was forced to regroup.

Pedigree Notes: A $14,000 short yearling at Keeneland January in 2017, Mucho Gusto improved to be a $95,000 Keeneland September buy, but was bought back on a bid of just $55,000 at OBS March last spring. But the chestnut blossomed–to put it mildly–and was purchased by Michael Lund Petersen for $625,000 (consigned by Kirkwood) at last year’s Fasig-Tipton Midlantic Sale after spectacularly breezing a quarter over a rain-affected strip in :21 1/5.

In his first start since finishing third as the favorite in the Sunland Park Derby (G3), Michael Petersen’s Mucho Gusto will return to sprinting in the $100,000 Lazaro Barrera Stakes (G3) May 18 at Santa Anita Park.

A seven-furlong test for 3-year-olds, the Lazaro Barrera attracted six entries, with Mucho Gusto drawing the rail. Regular rider Joe Talamo will be aboard.

Trained by Bob Baffert, Mucho Gusto led the 1 1/8-mile Sunland Park Derby early while racing inside before fading in the stretch in the March 24 test at Sunland Park. Before that effort, the son of Mucho Macho Man  drew off to a 4 3/4-length victory in the Feb. 2 Robert B. Lewis Stakes (G3) on a sloppy track at Santa Anita.

Also returning to sprinting Saturday is Del Secco DCS Racing’s Sparky Ville, who won the seven-furlong Feb. 10 San Vicente Stakes (G2) at Santa Anita. Trained by Jeff Bonde, the son of Candy Ride  will be making his first start since an off-the-board finish in the April 27 California Derby at 1 1/16 miles on the synthetic surface at Golden Gate Fields.

Kip Elser’s Kirkwood Stables sent out a colt by Union Rags (hip 213) to share the :21 3/5 quarter-mile bullet time Wednesday.  “He’s a pretty fast horse,” Elser said of the son of stakes placed Isabelle=s Thunder (Mineshaft). Of the track conditions, Elser added, “We’ve had good weather the last day and a half, but they have done a great job in the last two weeks keeping the track safe. It was safe yesterday and it’s fast and safe today.”

Pletcher-Trained Coal Front ‘Going According To Schedule’ For Met Mile 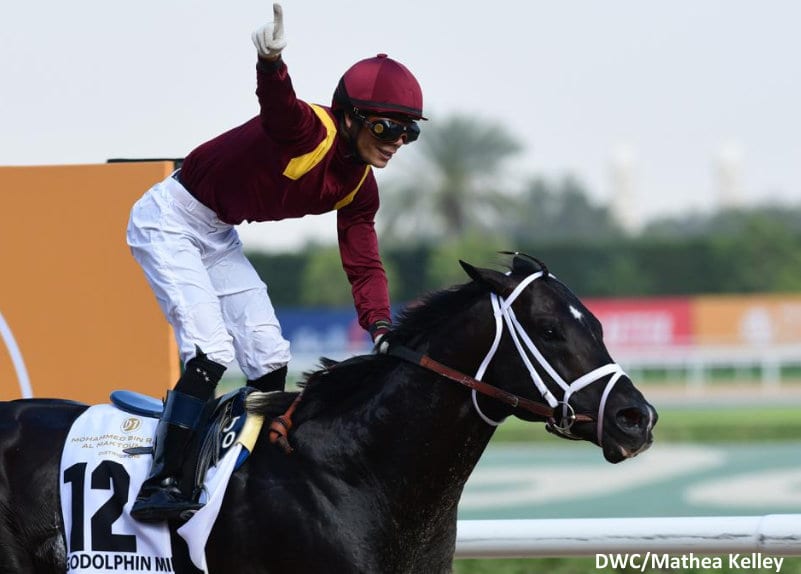 Robert LaPenta and Head of Plains Partners’ Coal Front continued his preparations for the Grade 1, $1.2 million Runhappy Metropolitan Handicap when he breezed four furlongs in 50.55 seconds on Friday morning at Belmont for trainer Todd Pletcher.

The move was the son of Stay Thirsty’s second work since an overseas triumph in the Group 2 Godolphin Mile on March 30 at Meydan Racecourse in Dubai.

“I thought he worked really well, consistently with what we’ve been seeing before he went to Dubai,” Pletcher said. “It seemed like he shipped back with some good energy, good weight and all the all the signs that you would hope for coming back from a long trip like that. I was very happy with the breeze this morning and everything is going according to schedule so far.”

A five-time graded stakes winner at five different tracks, Coal Front has won three races in a row. Prior to his international endeavor, he won the Mr. Prospector on December 22 at Gulfstream Park and the Razorback on February 18 at Oaklawn Park. Both are Grade 3 events.

The colt was bred in Kentucky by Michael Edward Connelly, and LaPenta purchased Coal Front for $575,000 at Ocala Breeders Sales Company’s 2-Year-Olds in Training Sale in April 2016.

Pletcher also spoke of Marconi, who won his second straight stakes race in Thursday evening’s Flat Out and said that the well-bred son of Tapit would target the Grade 2 $400,000 Brooklyn Invitational as part of the Belmont Stakes Racing Festival on June 8.

In the 1 3/8-mile event over the main track, Marconi sat just off of pacesetter Tour de Force and took command at the top of the stretch to draw off by 2 ¾ lengths under a patient ride by Jose Lezcano.

“It was exactly the way that we thought it would unfold on paper,” Pletcher said. “We were able to get into a good comfortable gallop and I thought he ran a really big race.”

Pletcher also noted that graded stakes winner Bellavais is possible for the Grade 1 $700,000 Longines Just a Game on Belmont Stakes Day. The daughter of Tapit breezed a half-mile in 49.90 seconds over the Belmont training track on Thursday morning. Two-time winner Last Judgment, ninth in the Grade 3 Pat Day Mile at Churchill Downs last Saturday as the second choice, will target the $150,000 Easy Goer.