ROCKIN READY (More than Ready) brought $280,000 at the OBS March Sale in 2017. Now owned by Agave Racing Stable  and trained by  Philip D’Amato, he is now working his way through his allowance conditions and today wired the field at Oaklawn racing a mile on the dirt. He won easily by over 5 lengths. ROCKIN READY has earned over $154,000. 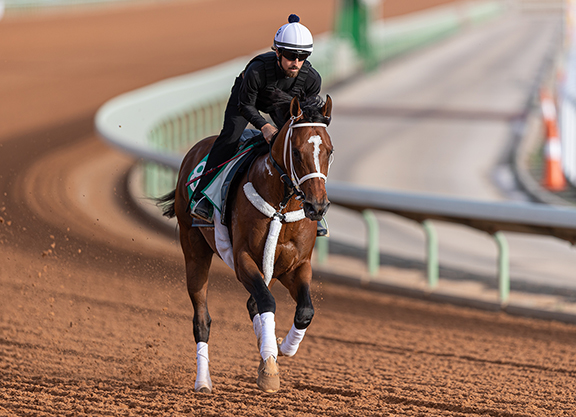 They traveled thousands of miles to get there, but the four main American contenders will all start within feet of each other in Saturday’s inaugural $20-million Saudi Cup at King Abdulaziz Racetrack in Riyadh after post positions were drawn Wednesday evening in Saudi Arabia. Bloom Racing Stable, Madaket Stables and Allen Racing’s champion filly Midnight Bisou (Midnight Lute) will break from post six, while 2019 champion 3-year-old Maximum Security (New Year’s Day) will break from post seven and Bob Baffert stablemates Mucho Gusto (Much Macho Man) and McKinzie (Street Sense) drew posts eight and nine, respectively.

Also representing the U.S., Juddmonte Farm’s Tacitus (Tapit), who has impressed while training in the desert this week, drew post two.

“We blew him out Tuesday,” Riley Mott, deputizing for his father, trainer Bill Mott, said Wednesday. “He went in a pretty snappy time of :35 with a gallop-out of :48 3/5. He looked like he was galloping through the stretch. It didn’t seem he was going that fast, but good horses will do that. He’s generally not that aggressive of a work horse and he was by himself. Given those factors, it was very impressive.”

Tacitus, who made a habit of finding trouble for himself, while consistently hitting the board, in most of last year’s major sophomore races, will be making his first start since finishing third in the GI Jockey Club Gold Cup last September at Belmont Park.

The gray colt, a son of Juddmonte’s champion Close Hatches (First Defence), has acclimated well since shipping to Saudi Arabia last week, according to the 28-year-old Mott.

“He settled in immediately,” Mott said. “He’s very professional in that regard. His appetite has been good, his temperature has been good. Legs are clean. He’s moving sound. He seems to get over the track very well. When the horse gets over it, he doesn’t seem to be ‘spinning his wheels’ or struggling. It seems like a good surface as far as I can tell.”

While Midnight Bisou, Maximum Security, and McKinzie will all be making their 2020 debuts in the 1800-meter Saudi Cup, Mucho Gusto is coming off an authoritative victory in the Jan. 25 GI Pegasus World Cup Invitational.

Trainer Bob Baffert, who was on hand trackside in Riyadh for the first time Wednesday morning, said he has been impressed by the 4-year-old’s recent progress which culminated with the break-out win at Gulfstream Park last month.

“Mucho Gusto has really changed a lot,” Baffert said. “These last three months I’ve seen a big change in him. He’s filled out. He’s just changed for the better. You could tell from that last work right before the Pegasus Cup Invitational a light went on in him. The way he ran. He’s always shown up. He’s always run hard. He’ll be right there.”

Mucho Gusto will be making his second start for Prince Faisal Bin Khaled after beginning his career for Michael Lund Petersen, for whom he won four Grade III races at two and three.

Another veteran of the Pegasus World Cup card going postward in the Saudi Cup is the globe-trotting Irish mare Magic Wand (Ire) (Galileo {Ire}), who drew post 12 in the 14-horse field. The 5-year-old, campaigned by Michael Tabor, Susan Magnier and Derrick Smith, has won or placed in Group 1 races in Australia, Hong Kong, the U.S., Ireland, and France. She will be making her first start on dirt following a runner-up effort in the GI Pegasus World Cup Turf Invitational.

Godolphin’s Benbatl (GB) (Dubawi {Ire}), a Group 1 winner on three continents, took to the dirt with aplomb in his most recent start, winning the G2 Al Maktoum Challenge Round 2 at Meydan Feb. 6. The 6-year-old will break from post three Saturday.

“It would mean a lot for us to win,” trainer Saeed Bin Suroor said. “It is the first ever Saudi Cup and the first big international race in Saudi. It is a very important race and would be important for us to see him run well and win. He has been a very good Group 1 horse for us and very versatile. I’m very happy with him and I think he will give a good run.”

Morgan’s Ford Farm purchased Un Blessed, in foal to Sidney’s Candy, for $110,000 at the 2014 Keeneland November sale. Her Ghostzapper colt sold for $150,000 as a weanling at the 2018 Keeneland November sale and for $430,000 at last year’s Keeneland September sale. The mare, a daughter of Grade I winner Plenty of Grace (Roberto), also has a yearling filly by Gun Runner and was bred last year to Ghostzapper. Plenty of Grace also produced the dam of multiple graded stakes winners Diabolical (Artax) and What a Name (Ire) (Mr. Greeley), as well as the dam of Grade I placed Grace Anatomy (Aldebaran).
Lifetime Record: MGSP, 15-2-3-2, $314,830
O-Estate of JamesJ. Coleman, Jr.
B-Morgan’s Ford Farm (VA)
T-Dallas Stewart

Kip Elser’s Kirkwood Stables will continue to only gallop its entrants during the under tack show for The Gulfstream Sale as the stable has done for the past two years, rather than push the juveniles through a timed workout.

“We have had very positive results at the sales and on the racetrack,” Elser said. “Maybe we leave a little money on the table, but we are selling every horse and reducing the injury rate.”

During the first two years of the program, Kirkwood offered 14 juveniles, of which eight were sold in the ring for an average of $121,250. The others that did not meet their reserve prices all found new homes through private sales.

Out of these 14 horses, 11 went on to start in a race, and six became winners. Four of the horses became black-type performers, led by winner Splashy Kisses, a daughter of Blame  who was second in the Pocahontas Stakes (G2) and third in the Sweet Life Stakes (G3), and Defense Wins, a son of Flatter  who was third in last year’s Runhappy Del Mar Futurity (G1). Both of these graded stakes horses are trained by Doug O’Neill. Kirkwood also sold stakes-placed winners Irish Hustle, a daughter of Data Link, and Wicked Slider, a gelding by Wicked Strong .

At the upcoming April 1 auction at Gulfstream, Kirkwood will offer the following horses as part of its gallop-only program:

Courtesy of the Paulick Report

After starting his year off with a handy victory in the $3 million Pegasus World Cup Invitational Stakes on January 25, the Bob Baffert-trained Mucho Gusto finds himself on top once more in the initial National Thoroughbred Racing Association (NTRA) Top Thoroughbred Poll of 2020, the NTRA announced today.

In his 4-year-old debut, Mucho Gusto earned the first Grade 1 victory of his career when he drew off for a 4 ½-length victory over Mr Freeze in the 1 1/8-miles Pegasus. The chestnut son of Mucho Macho Man was a multiple graded stakes winner as a sophomore but took a big step forward in his first outing since September – one that was noticed by voters who gave him 12 first-place votes and 224 total points.

Champion Midnight Bisou, who is gearing up to make her seasonal debut in the $20 million Saudi Cup on February 29, ranked second in the poll with 4 first-place votes and 188 points. Trained by Steve Asmussen, Midnight Bisou earned the 2019 Eclipse Award for Champion Older Dirt Female following a campaign that saw her win seven of eight starts.Maximum Security, the reigning champion 3-year-old male, received 11 first-place votes and 186 points to sit third. Like Mucho Gusto and Midnight Bisou, Maximum Security is also slated to make his next start in the Saudi Cup.

Graded stakes winners Silver Dust and Warrior’s Charge each have 40 points to round out the top ten.

The NTRA Top Thoroughbred Poll concludes November 9 after the running of the Breeders’ Cup.

With the Road to the Kentucky Derby starting to heat up, the flashy Tiz the Law stands as the one his classmates are chasing. Trained by Barclay Tagg, Tiz the Law sits atop the first edition of the NTRA Top 3-Year-Old Poll with 17 first-place votes and 252 points following his season-opening triumph in the Grade 3 Holy Bull Stakes on February 1.

Tiz the Law captured the Grade 1 Champagne Stakes last October and suffered his lone blemish in four career starts when he finished third in the Grade 2 Kentucky Jockey Club Stakes on November 30.

The Top 3-Year-Old Poll concludes June 8 after the Belmont Stakes.

Mucho Gusto was a $625,000 two-year-old purchase at Timonium prepared and  consigned by Kirkwood
Mucho Gusto, who debuted for his new owner, Prince Faisal Bin Khaled, in the Pegasus, worked six furlongs on a fast track for trainer Bob Baffert. The 4-year-old Mucho Macho Man  colt was timed in 1:11 4/5, the fastest time of seven at the distance.

The Saudi Cup will be run at 1,800 meters (about 1 1/8 miles) at King Abdulaziz Racetrack. Both horses have won at the grade 1 level at the distance

VIOLENT SPEED figured it out! She wired the field racing 6 1/2 furlongs on the Santa Anita dirt and won by 10 1/2 lengths. She is trained by  Doug F. O’Neill
and owned by Great Friends Stable, LLC.  The 3-year-old filly was a $64,000 graduate of the Kirkwood Timonium consignment in 2019.

Recently 2nd in the Crescent City Derby, last out, JUS LIVELY (Paddy O’Prado) won in allowance company going a mile and seventy on the dirt at the Fair Grounds. Racing back at the same distance and track she overcame being boxed in on the rail and cleared to win for the 2nd time in a row. She has now won 4 of her 6 starts plus a stakes placing. The four year old filly is owned by Ellen Addison  and is trained by  Steven M. Asmussen. She has earned over $115,000.