JUS LIVELY took 1 race to figure out the game then graduated in his next out. He followed that right up with win #2.  The Paddy O’Prado 3-year-old did not have an easy trip through the field, but cleared for a win by 3 lengths. He raced a mile and 70 yards on the dirt at the Fair Grounds. He is owned by  Ellen Addison and trained by Steven M. Asmussen.

3 year old Data Link filly IRISH HUSTLE saved ground early and then moved into contention and cleared the field for the win.  She raced a mile on the dirt in a race pulled off the turf. She was offered as one of Kirkwood’s  Gallop Group at Gulfstream and purchased by current owner  Martin Racing Stable LLC. The filly is trained by W. Bret Calhoun.

Courtesy of the BloodHorse

At last year’s edition of The Gulfstream Sale, Fasig-Tipton’s 2-year-olds in training sale in Florida, Kip Elser took an unconventional route in showcasing his Kirkwood Stables’ five-horse consignment to potential buyers by galloping them in the presale under tack show, rather than putting the youngsters through rigorous timed workouts.

That was a healthy return on the initial purchase price of $154,000 for the five horses bought under the name Gulfstream Gallop specifically for the purpose of being offered at The Gulfstream Sale without breezing.

Elser, a veteran horseman based in Camden, S.C., undertook the Gulfstream Gallop experiment after he became reacquainted with a friend from the horse industry while attending the races at Saratoga Race Course. The unnamed friend discussed the idea of buying yearlings and offering them for sale as 2-year-olds without the benefit of a presale breeze, and the two embarked on the venture that not only produced a healthy profit but also has had early success with its graduates on the track.

“It was his idea when we met at Saratoga, and he called me couple of days later and said, ‘Let’s do it,'” Esler said. “I couldn’t have done it without him. It was his idea, and he had the bravery to go ahead and give it a try.”

Based on last year’s success, Elser is returning to this year’s Gulfstream sale with a nine-strong consignment that will follow the same unorthodox presale exercise regimen undertaken last year. This year’s Kirkwood group includes four horses selling for a new partnership that also bought yearlings specifically to be sold at Gulfstream after they only gallop during the under tack show.

“I had a few other people approach me, and I asked (the original investor) if he wanted partners, and he said he’d rather do it himself and that I should put together another partnership for them,” Elser explained.

Elser said most of the individuals in the second partnership are also experienced horse people, and the four yearlings bought for their pinhooking purposes were acquired under the name Midway Gallop, a modified version of the original Gulfstream Gallop banner.

Four of Kirkwood’s five Gulfstream Gallop juveniles have won or placed on the track, with the fifth recently returning to training. The most successful of the group is Splashy Kisses, a daughter of Blame  who ran second in the Pocahontas Stakes (G2) at Churchill Downs and third in the Sweet Life Stakes (G3) at Santa Anita Park for owners ERJ Racing, Phoenix Thoroughbreds, and Dave Kenney and trainer Doug O’Neill.

Like four of the five Gulfstream Gallop entries last year, Splashy Kisses was bought out of the one-and-done 2017 Fasig-Tipton Turf Showcase Yearling Sale for horses predisposed to grass racing through genetics or conformation. Kirkwood and Gulfstream Gallop paid $30,000 for the bay filly, and she was later bought by Dennis O’Neill, her trainer’s brother, and ERJ Racing for $100,000 at the Gulfstream auction.

Included in the group to be offered in this year’s Gulfstream sale by Kirkwood, agent for Midway Gallop, is a Ghostzapper  half brother to grade 1 winner Time and Motion that went unsold on a final bid of $170,000 when offered by Darby Dan Farm at last year’s Keeneland September Yearling Sale. Produced from the stakes-winning Kris S. mare Ellie’s Moment, the colt consigned as Hip 26 descends from deep Darby Dan blood. His second dam is the stakes-placed Graustark mare Kelley’s Day, the dam of dual grade 1 winner and sire Brian’s Time.

Kirkwood Stables has one other horse in the sale, a More Than Ready —My Lady Lauren colt (Hip 86).

Considering the success of last year’s Gulfstream Gallop, Elser’s program should no longer be considered an experiment but a legitimate market niche.

“We’re hearing positive things about the other horses from last year, and 11 months later people still think they have a shot to get their money’s worth,” Elser said. “Now we are expanding somewhat. We have no illusions we are going to become a major part of the market, but I think there is a niche.”

Champion older female and champion turf runner:
I’m Betty G (b.m., 2014, by Into Mischief—Lady in Ermine, by Honour and Glory). Bred by Carol Kaye and Boyce Stable; owned by Three Diamonds Farm; trained by Michael J. Maker. She got her start at Kirkwood and was consigned and sold at Timonium in 2016 for $150,000. 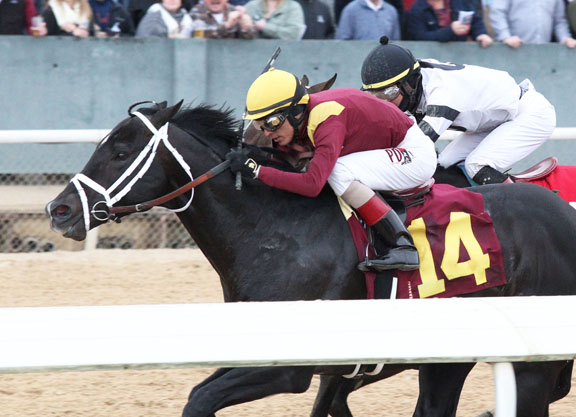 Coal Front made his first start around two turns a winning one, leading home a ‘TDN Rising Star’ exacta over Copper Bullet in Hot Springs Monday.

Away to a sharp start from the often-tricky post 14, Coal Front immediately locked horns with California invader All Out Blitz (Concord Point) heading into the first turn and the pair sparred through a sharp opening quarter-mile in :22.78. Coal Front allowed his pace rival to momentarily spurt clear after that juncture, but quickly reasserted himself heading into the far turn. Striking the front in mid-stretch, the dark bay dug in determinedly to hold off a persistent late bid from Copper Bullet to claim the victory. Longshot Rated R Superstar, who encountered some traffic trouble while closing from the back of the pack, settled for third at odds of 70-1.

Coal Front displayed significant talent from the outset of his career, capturing his first three starts, including the GII Amsterdam S. at Saratoga in July 2017. He added a victory in the GIII Gallant Bob S. in September of that year, but was subsequently sent to the sidelines for an extended layup. Returning to action 13 months later with a fifth-place finish in Aqueduct’s GIII Bold Ruler S. Nov. 2, he got back on track with an authoritative score in the GIII Mr. Prospector S. at Gulfstream Dec. 22. The son of Stay Thirsty posted a steady series of drills at Todd Pletcher’s Palm Beach Downs base in preparation for his two-turn debut.

Coal Front’s dam Miner’s Secret is an unraced half-sister to MGSW turfer Woodlander (Forestry), SW Admiral Alex (Afleet Alex) and to the dam of GSW Azar (Scat Daddy). In addition to SW/GSP Conquest Titan (Birdstone), Miner’s Secret is represented by a 2-year-old filly by Pioneerof the Nile and a yearling colt by American Pharoah. She was bred to Arrogate last year.

SPLASHY KISSES was one of the five 2-year-olds purchased as yearlings in 2017 under the name Gulfstream Gallop sold at the 2018 Gulfstream auction. The Blame filly was a maiden winner at Del Mar in August and finished second in the GII Pocahontas S. at Churchill Downs.

“We feel great about last year’s results,” Elser said. “That vindicates the project. We have some later-developing horses who ran well first time and look like they are okay. But to have the one filly be graded placed in the first small group of relatively inexpensive horses is very gratifying. I’ve checked with everybody who has one and they are pleased enough. They are going to win their share, they think.”

After putting a toe in the water last year, Elser’s client decided to increase his investment going into the 2018 yearling sales.

Gulfstream Gallop opened its 2018 yearling purchases with a $50,000 colt by Bayern  at the Fasig-Tipton July sale and purchased a colt by Flatter  for the same price at the Keeneland September Yearling Sale. It made its biggest purchase of the year with a $65,000 daughter of Street Sense  one of three purchased at the Fasig-Tipton October sale.

WATCH FOR THEM AT GULFSTREAM

10) MUCHO GUSTO (c, Mucho Macho Man–Itsagiantcauseway, by Giant’s Causeway)
O-Michael Lund Petersen. B-Teneri Farm Inc. & Bernardo Alvarez Calderon (KY). T-Bob Baffert. Sales History: $14,000 Ylg ’17 KEEJAN; $95,000 Ylg ’17 KEESEP; $55,000 RNA 2yo ’18 OBSMAR; $625,000 2yo ’18 EASMAY. Lifetime Record: MGSW & GISP, 4-3-1-0, $234,000.
Last Start: 1st, GIII Robert B. Lewis S., SA, Feb. 2
Next Start: Uncommitted
Equineline PPs. KY Derby Points: 14.
Newsflash: Bob Baffert has sent out the favorite in every graded dirt stakes for male juveniles/sophomores on the SoCal circuit dating back to September. That’s a span of six races, and he’s now won five of them (including one race when the fave lost but his higher-priced entry won). ‘TDN Rising Star’ Mucho Gusto (Mucho Macho Man) is the latest to hit the winner’s circle, but the lack of depth in Saturday’s five-horse GIII Lewis S. and a sealed/sloppy surface make it tough to get a true read on where this $625,000 EASMAY colt stands in the pecking order. Mucho Gusto broke alertly, backed off the lead, then targeted the pacemaker all the way down the backside before inhaling that overtaxed rival while in hand midway on the far bend. Mucho Gusto seemed to momentarily stall for a stride or two when set down for the drive three-sixteenths out, then quickly recovered, responding to more energetic rousing while kicking clear to win by a geared-down 4 3/4 lengths. In the post-race interview, Baffert expressed satisfaction that Mucho Gusto got to the next level by learning to relax off the pace. Yet with reference to sidelined ‘TDN Rising Star’ stablemate Tale of the Union (Union Rags), who is also owned by Michael Petersen, Baffert conceded “This was actually the second string here–but he’s a pretty good horse.”

Owned by Michael Lund Petersen, Mucho Gusto became the latest sophomore from the barn of Hall of Fame trainer Bob Baffert to stamp himself within the division. He debuts at No. 4 in this week’s poll.

“This is the time of the year when you want to start getting excited about something (on the Triple Crown trail),” Baffert said after the race. “We’re still dreaming in Technicolor, but they have to start performing and they have to move forward from here, but it’s a fun position to be in.”

Racing 1 1/16 at the Fair Grounds, 3-year-old Bernadini colt AQUADINI stalked and then surged wide on the far turn to draw off and graduate  by  5 3/4 lengths.  He is owned by Andrew Farm & On Our Own Stable, LLC and trained by Dallas Stewart.