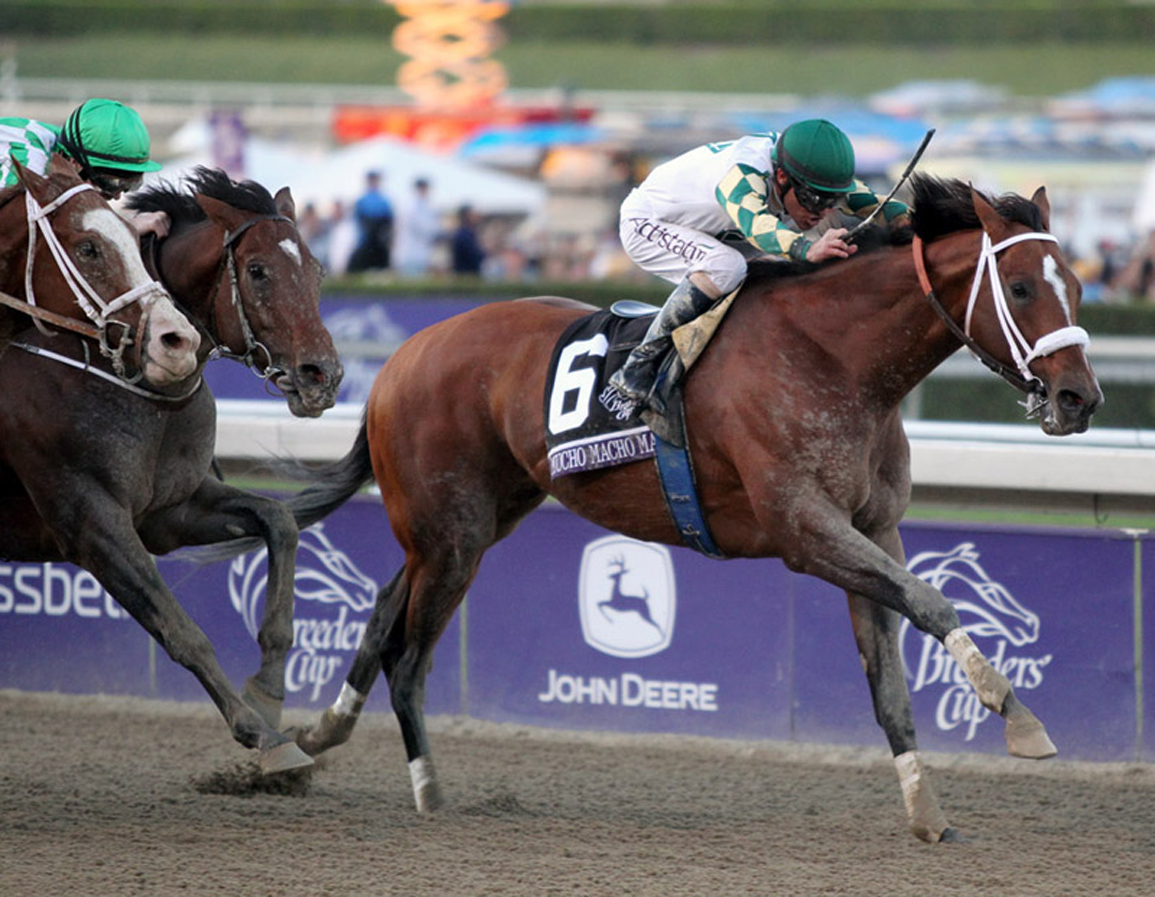 MUCHO GUSTO (Mucho Macho Man) lived up to his name and then some with an ultra-impressive debut victory at Los Alamitos Thursday to become his freshman sire (by Macho Uno)’s fourth winner and first ‘TDN Rising Star.’ Hammered down to even-money favoritism, the $625,000 EASMAY buy broke on top from his rail draw and was just loping along under a motionless Joe Talamo as he zipped through a first quarter in :21.96. He floated out three wide turning for home, but was still going easily, registering a half-mile in :45.75. Confronted by a rival to his inside at the top of the stretch, the chestnut instantly powered clear when given the signal by Talamo, pouring it on down the lane to win by a geared-down four lengths. Vantastic (Dialed In) completed the exacta.

Picked up for just $14,000 at Keeneland January, Mucho Gusto brought $95,000 in his next trip through the Keeneland ring that September. The colt RNA’d for $55,000 at the OBS March sale after breezing an eighth in :10 flat over the synthetic and was sent through the ring at the Fasig-Tipton Midlantic Sale two months later, where he summoned $625,000 from Michael Lund Petersen after working a quarter-mile over a sloppy dirt track in an eye-catching :21 1/5. He is currently the most expensive offspring of 2013 GI Breeders’ Cup Classic hero Mucho Macho Man to be sold at auction.

Mucho Gusto hails from the family of Canadian Horse of the Year and MGISW Peaks and Valleys (Mt. Livermore) and MGSW millionaire Alternation (Distorted Humor). The winner’s dam Itsagiantcauseway (Giant’s Causeway) did not produce a foal in 2017, but had a Jack Milton colt Apr. 15 of this year and was bred back to Alpha.

4-year-old gelding GRAY DUDE (First Dude) winner at 3 of the Starter Stakes Jack Flats at Gulfstream,  won his 6th race.  Racing 7/12 furlongs on the turf at Gulfstream and initially trapped on the rail he finagled his way out and clear for the win. He was claimed out of this effort and we wish his new connections the best. He has earned over $175,000.

SPLASHY KISSES (Blame) is a graduate of the Kirkwood Gallop Only contingent at Gulfstream. She stepped up into graded stakes company and finished 2nd to add her first black type.

“She acts like the farther the better,” said O’Neill, who trains Splashy Kisses, a 2-year-old daughter of Blame, for Dave Kenney and Erik Johnson, a defenseman with the National Hockey League’s Colorado Avalanche.

Bred by AR Enterprises out of the Giant’s Causeway mare First Passage, Berned was a $550,000 purchase by West Point Thoroughbreds when she was consigned to the 2015 Keeneland September Yearling Sale by Bluegrass Thoroughbred Services.

Courtesy of the Paulick Report
By Jen Roytz

Mr. Wilson (gray) teaching lessons to both horse and human.

Everyone needs a good teacher. Even those brave souls who ride racehorses on a daily basis needed to start somewhere and hone their craft. The same goes for horses, who before they achieved greatness going full-tilt, often learned how to jog and gallop around a training track alongside a reliable partner. Through setting good examples and keeping a cool head, that “equine teacher” helped them find their confidence and competitive edge.

For a lucky group, both horse and human, Mr. Wilson was their teacher.

Bred by Matthew Firestone and sold for $150,000 at the 2000 Fasig-Tipton Selected Yearling Sale in Saratoga, the then-dapple gray raced 15 times as Mouthadasouth before being given away as he was cooling out after a disappointing finish in his final start.

“He had rocket speed but had a wind problem and was running in the 4-1/2-furlong races at Charles Town and was given to a friend of mind in the receiving barn, which is how we got him,” said Helen Richards, a former jockey and wife of Kirkwood Stables owner Kip Elser. “To say he has an attitude is an understatement. He wants things to be done his way, and if they’re not he is quite the grouch. That’s how he got his nickname, “Mr. Wilson,” from the character on Dennis the Menace.

The couple sent their new horse to Tom Gilliland, who at the time was the head outrider in New York, to be trained as a lead pony. Once they got him back, they quickly learned how valuable of a team member for Kirkwood he would become.

Based in Camden, S.C., Kirkwood Stables is a multifaceted operation, offering training and conditioning of yearlings and 2-year-olds, as well as layup and rehabilitation for horses of racing age.

It was earlier this year at the Fasig-Tipton Gulfstream select two-year-olds in training sale that Elser’s consignment made headlines when he announced that the five horses entered under the Kirkwood Stables banner would be galloping rather than breezing during the breeze show.

“A friend of mine, who is a bit of a contrarian, suggested we try it, so all of our horses came down the lane at a nice, strong gallop rather than at a full-out breeze,” said Elser. “I would like to think a little less pressure early on will leave a bit more in the tank for the next owner and trainer. The approach was very well-received and we’re going to expand the program with more horses galloping rather than breezing next season.”

At an operation like Kirkwood, most people have to wear multiple hats. For a horse like Mr. Wilson, it means wearing multiple saddles.“With a Western saddle he is the perfect pleasure horse. He never picks up the bit, loves trail riding and doesn’t have a spook in him. Throw an exercise saddle on him and a D-bit and Mr. Wilson takes quite a hold,” said Richards.

Mr. Wilson goes out with every set of young horses, galloping with them in company the first few days to provide an example for them to follow, and keeping them in line when they misbehave. He’s also the test that any Kirkwood rider has to take before they’re allowed to be legged up onto one of the racehorses.

“He’s not very big, but he lets even the largest horse know it would be in their best interest if they got with the program,” said Richards. “He’s also taught many riders how to gallop and he’s great with green riders. He’s spent hours in the infield teaching riders lead changes with figure-eights, and if an aspiring rider can gallop Mr. Wilson in company, they are proficient enough to graduate to our other horses.”

At 19 years old, Mr. Wilson is still going strong, putting in more miles on a daily and weekly basis than any of his pupils in training and letting riders know when they’re ready to hop aboard a fit racehorse… and when they’re not.

“Horses are like family,” said Elser. “As long as you put in a little bit of effort to find out what they like to do, they’ll repay you tenfold.”