Sprinting 5 1/2 furlongs at Penn National, STRONG BREEZE (Mizzen Mast) gamely repelled a closer to wire the field for a win in allowance company. He is owned by Ernesto Padilla-Preciado  and trained by  Silvio L. Martin. 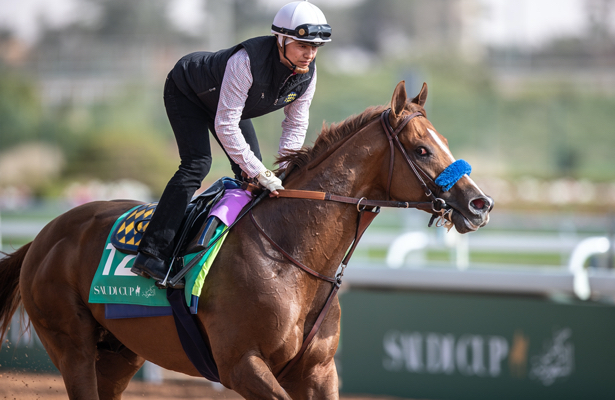 Two of the five American interests in last Saturday’s Saudi Cup will wheel back in another of the Middle East’s lucrative races.

Mucho Gusto, who set the pace in the Saudi Cup, weaved in the stretch under Irad Ortiz Jr. before fading to fourth. Campaigned now by Saudi interests, he entered off a victory in the Pegasus World Cup (G1), and Baffert said “a light went on” recently for the 4-year-old son of Mucho Macho Man.

Tacitus ran an even fifth in the Saudi Cup, his first start since a third last fall in the Jockey Club Gold Cup (G1) at Belmont Park. The 4-year-old son of Tapit, twice a graded winner last season, is more well known for his board-hitting tendencies with seconds in the Belmont Stakes, Jim Dandy (G2) and Travers (G1)
The top-finishing Americans in the Saudi Cup — winner Maximum Security and runner-up Midnight Bisou — are officially headed back home to the U.S., according to Hersh. Maximum Security trainer Jason Servis had said Sunday that the colt was “doubtful” to wheel back, saying “he needs ample time where I can lead him over, and I feel good about that he’s 100% and gives it his all.”

McKinzie, the other American runner in the Saudi Cup, disappointed when finishing 11th in his 5-year-old debut.

It’s likely Saudi Cup third-place finisher Benbatl, a Godolphin runner trained by Saeed bin Suroor, goes on to the Dubai World Cup as well. Those connections have won the last two editions of the race with since-retired Thunder Snow.

The top horse going straight from the states to Dubai is Sir Winston, the 2019 Belmont Stakes winner who recently won an Aqueduct allowance for trainer Mark Casse in his 2020 debut. Other Dubai World Cup contenders will be determined this weekend when the Al Maktoum Challenge Round 3 (G1) features on a “Super Saturday” card at Meydan. Among names on the initial entries list, Quip, a Grade 2 winner when campaigned in the U.S., is highest rated.